"This “kava fact” below is less “fact” more “experience”, but still based on a preliminary study undertaken by steinerbio. It shouldn’t be taken as scientific fact. The study presented in this report has limited scientific value and does not allow for any meaningful conclusions in regard to kava’s usefulness in the treatment of addictions. It does, however, give us a place to start."

Back in 2002-2004 I found myself heavily addicted to pain killers due to my own poor choices. I had the opportunity to seek help and get treatment for my addiction. Just the thought of having to live my life without them made me shudder. There wasn’t a thought in my head that wasn’t directly related to getting and using more. 6 months into life without opioids I found myself happy with the general direction of things, but still experiencing an underlying base of anxiety and restlessness, not to mention the gut-wrenching cravings I would have. It was at this time I decided to look at the natural route in terms of anxiety treatment. I found myself in the supplement aisle at Whole Food where I decided that this “kava kava” stuff would probably be okay to try. Since 2005 I’ve been consuming kava in one form or another, starting with extract pills and moving my way to powdered root. I found it excellent for my social anxiety and also noticed a little something extra.


It was a bit after I began taking kava, realizing it actually worked, that I noticed another impact. I also noticed I was smoking less cigarettes and reacting to stimuli in different ways, and then it hit me. I wasn’t craving getting high anymore. That gnawing desire for those chemicals that would have certainly ended my life was gone. Some people may view this as substitution, and I would agree with that, but I hadn’t been on anything for over 6 months at that point. It wasn’t the feeling I was looking for, but for some reason it just ate up my desire for opiates. It worked so well that I remember feeling guilty seeing everyone else struggle so much with drug cravings. I knew there was something about this kava that could help others in my situation. Low and behold, I must not be the only person to experience this. The study I’m referencing today took upon themselves to test the anti-craving properties of kava. I suggest reading through the source listed, as it’s freely available. I believe it possibly speaks to quantifying some of kavas anti-craving properties, but I wont be making any conclusions based on it.

In the study they gave kava (1 cup root to 1 gallon water) to volunteer addicts at the homeless shelter. Only subjects that were currently sober were accepted into the group. After about one hour the subjects were asked their opinion on how they felt about their desire for their drug of choice. No placebo was used, and no objective measures of craving were utilized. 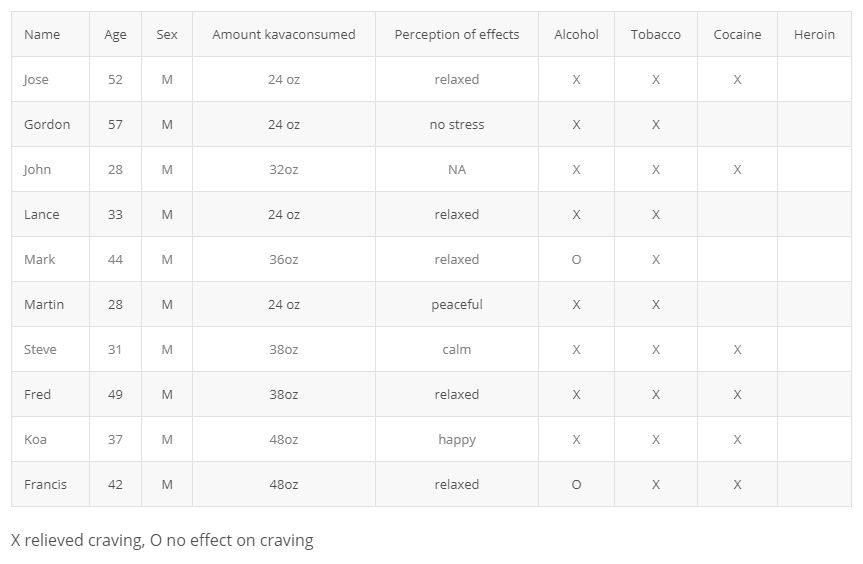 In the second part of this study subjects were given 30mg kavalactone extracts. They were then told to take 2 capsules every 3-4 hours as needed to control cravings. Significant results were found in the group looking to reach alcohol abstinence, and some with cocaine abstinence, although not enough to be significant with cocaine. With tobacco, the subjects were less likely to attempt cessation as in relation to their other addictions, tobacco was seemingly insignificant. They did see, however, that the subjects experienced a gradual reduction in smoking as the study progressed [1].

You’ll have to draw your own facts and conclusions about what this study may be saying. I’m curious though. What is your experience? Have you noticed any reduction in troublesome or just strange habits since you’ve started drinking kava?